Back with another instalment in the popular series “I wish I knew then what I know now” is Greg Brown, current Education Manager / Clinical Nurse Consultant with CareFlight and former Australian Army officer.

Intravenous cannulation: the art of finding the biggest tube with a sharp point in your kit and placing it in the most proximal vein you can find so you can deliver various fluids or medications that may or may not make the patient feel better but certainly help you feel as though you have achieved something.

Okay, this might be a bit of a stretch – but in all seriousness the ability to gain and maintain dedicated vascular access in your sick patient is a vital component of medical care for nurses, paramedics and doctors alike. For many (both in and out of hospitals), the ability to find that elusive vein is a point of pride, and getting that solid red flashback in the chamber of the cannula is at times the cue for the treating team to stop holding their breath.

But the IV cannulation process is not complete once the [insert name of your service’s approved form of IV dressing] is applied. In the retrieval world, an IV cannula is almost always going to have fluids flowing through it (or at least attached to it). Having fluids attached gives the healthcare provider a ready-made flush for those medications that are used in treating the patient. Want to give a bolus of IV ketamine? You are going to need an IV flush. IV fentanyl? Flush.  IV anything? Flush. You are going to be flushing everything, so you might as well attach a 1000mL bag of “flush” via a giving set and have it ready at all times.

Herein lies the problem. For anybody who has ever had to move a patient with an IV line attached, you know just how easy it is for that line to get snagged – and before you know it, your precious cannula is now no longer in a vein and instead is irrigating the helicopter floor / CT machine / footwell of the crashed car etc. Your service’s approved form of IV dressing might be awesome at holding an IV cannula in place, but it is no match for the body weight of that burly rescue technician with the IV line inadvertently wrapped around his leg who is moving in the opposite direction to the patient.

Laws to Live By

Many years ago at CareFlight, one of our “grey beards” (Dr Blair Munford, anaesthetist extraordinaire), came up with what we now call ‘Munford’s Law of Taping’ which states:

“The length of tape used on the patient should not exceed the distance between the point of injury and the receiving hospital, but anything less is acceptable.”

Taping IV lines is a good thing, but tape doesn’t work great on wet, hairy or dusty patients. Sure, you can circumferentially tape the IV line to the arm such that the tape sticks to itself and not the patient, but that is a lot of non-stretchy tape.

Story time. Many years ago, whilst on deployment with the Army, I was tasked with transferring a civilian casualty from the scene of a vehicle accident to a landing point whereupon she was to be whisked away to a United Nations hospital by helicopter. The accident involved an overcrowded minivan which failed to negotiate a corner resulting in it rolling. The knock-on effect was a mass casualty incident halfway between two forward operating bases. Medical and security assets were despatched to the scene, including myself as a young (ish) nursing officer.

After the usual initial chaos that results when medicine and tactics collide, we dutifully set about the triage and treatment of casualties in accordance with priorities and started stacking inbound AME assets. Unfortunately, given the topography, the AME teams could not land on site; therefore, we were required to ferry the casualties from the scene to a landing point about 2km away.

One particular casualty of mine was a lady with a mid-shaft femur fracture and a handful of broken ribs. I had applied a Donway Traction Splint to the leg, some oxygen and was trying to bump up her blood pressure with crystalloids whilst controlling her pain with increments of IV morphine. I had placed an IV in her antecubital fossa and had “secured” the giving set with some tape. However, despite the accumulative administration of a lot of morphine (the exact dose escapes my memory), she was still very obviously in pain. The problem? As we loaded her into the vehicle, the IV line became looped around the stretcher handle and the cannula had dislodged.

Ordinarily I’d have just placed another IV and started again; but in this case I had two problems: (1) being a mass casualty incident my stores had been pillaged leaving me unable to place another IV, and (2) the Blackhawk was already flaring (meaning it was about to land), so I didn’t have time to go back to the scene to grab more stuff. This was a major fail when it came to managing this patient. And in addition, the woman’s pain and lack of analgesia were about to become the AME team’s problem, but the embarrassment of losing the ONLY IV access this patient possessed was mine alone.

There exists a remarkably simple solution to this problem, and it involves a bandage. We now teach this technique to anybody who will listen because, quite simply, there is no good reason for losing an IV. It works on the side of the road; it works in an ambulance; it works in Emergency Departments; and interestingly, it works really well in those dementia patients that occupy their time by trying to undo every single medical intervention you’ve applied during your 12 hour night duty!

Step 1: Place an IV cannula in your patient in accordance the patient’s need and your ability / scope of practice. Apply whatever dressing your service says you should.

Step 2: Attach your primed IV line as per the application of common sense. Ensure that the roller clamp on the line is as close to the bag as possible – you will need to be able to access it.

Step 3: Run the IV line down the limb around 10cm / 4in and cover in a bandage (the broader the bandage, the faster the technique), leave a loop then bandage the IV line back up the limb.

Step 4: Repeat step 3 ending with the free running end of the IV line heading towards the head of the patient (this is where you will be located; if you need to replace the IV bag it’s best if the bag is close to you).

Step 5: Secure the end of the bandage with some tape. Ensure that you leave the side injection ports of the IV line accessible. You may even wish to mark these with tape so that you can find them quickly when under stress.

When you secure the IV line with these superimposed S bends you create 40cm of dead space that will take up the strain on the line if the line is pulled. Once tension is applied to the line the loops cinch together to take up the strain. More of a visual learner? Yeah, me too. See the images below. 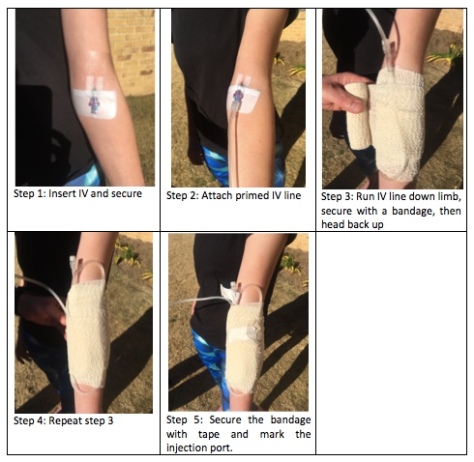 What I now know that I wish I knew then is that performing this technique takes no longer than trying to apply copious lengths of tape to a patient’s arm, especially when that arm belongs to a sweaty, hairy person. I also know that I never again want to be the clinician whose handover includes “well, there was an IV in the arm but I kinda lost it in transit…” If it is worth doing, it’s worth securing.

We bet this isn’t the only way to secure a line. Got tips for us to learn? Then put them in the comments. We like learning.

And remember if you like stuff on here, have a think about sharing it around. And maybe sign up to get an email when a post hits.