This is a popular series and it’s not hard to see why. Greg Brown drops back in to talk about the airway device that is now his go to item.

I clearly remember a time when the escalation of airway management in prehospital care resembled the fabled Underpants Gnomes from South Park and their three step plan to making a profit.

Back then, airway management looked something like this (and yes there were four steps, not three like in South Park):

Back in the day when I was new to military prehospital care (and at a time where not much was happening in the world) the focus seemed to be on big ticket items and not the purpose of the interventions. Indeed, it seemed to me that the drug of choice for any airway problem was plastic; and the bigger the problem, the smaller the dose.

What I know now is that the one’s choice of procedure must consider a whole lot more than just self-gratification. Airway problems are generally either an oxygenation or a ventilation issue, and the choice of procedure must take at least this into account. However, the purpose of this post on the Collective is not to discuss the differences between CICV and CICO (nor the relative advantages of DL vs VL) but simply to discuss basic airways.

Simple Is As Simple Does

There is no doubt that a patent airway that was issued to the patient at birth is best for the patient. Therefore, it goes without saying that anything that can be done by the treating professional to maintain a patent natural airway should be at least considered. I am not going to go into how best to clear an airway and position a patient as there are a myriad of reputable sources out there for you to conduct your own research but I will make two important points:

Still here? Good then, on with the show.

Which means it’s time to introduce one of the heroes: a simple artificial airway. To Guedel or not to Guedel? For many years that has been the question, and the oropharyngeal airway (OPA) was definitely my plastic of choice. Simple to insert and effective – two of my favourite things in a medical device. But are they deserving of their historical gold medal for simple airway adjuncts? Well, maybe yes and maybe no.

You see when it comes to simple adjuncts I have become, over the years, a massive fan of the nasopharyngeal airway (NPA). I would argue that they are just as simple to use as their orally inserted cousins – the operator just needs to be trained in their use. And whilst there are pros and cons to all medical interventions in my mind the NPA has one big benefit over the OPA – when (if) the patient starts to rouse the NPA can stay in, a handy thing for those pesky patients whose level of consciousness ebbs and flows.

Over the last ten years the NPA has gained popularity amongst first responders with thanks to support from some international heavy hitters, and not before time. You see, the NPA was actually invented before the OPA – 38 years earlier, in fact, by Joseph Clover of the Royal College of Surgeons (he later became a founding member of the Royal College of Anaesthetists) in 1870. The first OPA was designed by…. wait for it… Frederic Hewitt in 1908. The first “Guedel” was not even invented by Arthur Guedel whose name is now synonymous with the device. He didn’t enter the scene until the 1930’s (but I will grant that he made huge improvements to Hewitt’s rudimentary designs).

However, it was not until 2002 and the widespread introduction of Tactical Combat Casualty Care (TCCC) in militaries worldwide that the NPA started gaining favour once more. With thanks to a push from the United States Department of Defense’s Special Operations Command, NPA’s started making their way into the individual first aid kits of soldiers, sailors and airmen employed in combat operations. Indeed, by 2008 every Australian serviceperson employed in combat roles carried an NPA in a pouch alongside appropriate haemorrhage control devices. NPA’s are now taught as part of C-TECC guidelines (the civilian version of TCCC) and are now commonly the first artificial airway device reached for by those employed in first responder roles worldwide. 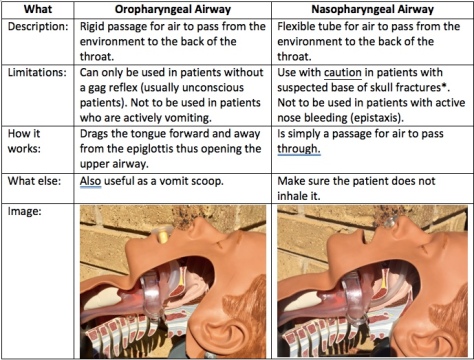 Are there risks associated with the of an NPA? Well, this is medicine, isn’t it? Of course there are risks. The big one that everybody immediately jumps to is in the patient with suspected basal skull fracture (or a fracture of the cranial vault). The risk in inserting an NPA here is that the tube may indeed enter the cranial cavity instead of heading into the nasopharynx. But a review of the literature reveals only two cases where this occurred thus making it a rather extreme reason to be afraid of using an NPA. (Note: that same review of the literature also revealed an article advocating the use of nasopharyngeal airways in the treatment of watery diarrhoea…. Four words: single use only please!)

Putting It To Work

Alternately, the second common method of sizing pertains to length – in theory the distance from the nostril of choice to the tragus (that flap at the front of the ear where it meets the cheek) is the same as from the tip of the nose to the upper pharynx. Yes?

Well, research by Roberts et al in the EMJ found that a combination of the two methods is required to get reach NPA nirvana and that in fact the patient’s height was a better determinant of requisite NPA size. They used data from MRI scans to determine that, all things considered, the law averages reigned supreme. Average height male? Size 7.0mm Portex NPA. Average sized female? Size 6.0mm NPA. Or, you could await the rollout of the MRI App on your smartphone of choice…

Once you have selected the correct size NPA you simply pick the largest nostril, lubricate the outside of the NPA (the patient’s saliva is usually sufficient) and insert whilst aiming for the patient’s ear (the same side as the nostril you are using). By aiming for the ear you are pushing backwards, not upwards, thus reducing the risk of the NPA entering the cranial vault in that patient with a suspected basal skill fracture. For this reason the presence of a suspected basal skull fracture has relegated to the status of relative contraindication (no longer an absolute contraindication). If any significant resistance to insertion is felt then the attempt should be aborted and the other nostril attempted.

Be sure to consider how you will secure the NPA. Certain members of society have naturally wider nares and I’ve seen them inhale their NPA. Placing a large safety pin through the shaft of NPA just below the flange decreases the chances of this happening, but in most patients I’ve treated the safety pin has not been necessary.

So there you have it – another thing that I know now that I wish I knew then is that the NPA is not an evil device guaranteed to lead any patient who has ever experienced a blow to the head on a one way trip to the morgue. Rather, the NPA is now my simple airway of choice, an intervention that I have used countless times both on battlefields and in emergency departments, and is the only airway device that I carry on every single job. Oh, and it also has some purpose in treating patients with watery diarrhoea…apparently.

Remember if you like things on this site there’s a box somewhere where you can throw your email address so you get a regular email when a new post hits.

Want to know about how your choices of airway adjuncts can affect ventilation? Then go here.

Interested in reading more about the facts and myths of NPA’s? Try this.

Here’s a cool little video about airway manoeuvres and simple adjuncts from that good crew at Life in the Fast Lane.

And a previous post that included the use of NPA’s in the tactical environment can be found here.